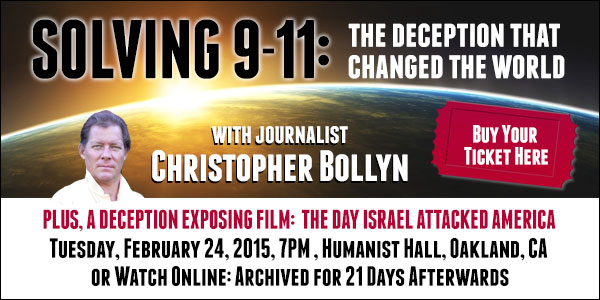 Christopher Bollyn is an American journalist who has investigated the events of 9-11.  He helped Professor Steven E. Jones in the spring and summer of 2006, when Jones found solid evidence of Thermite in the dust of the Twin Towers.  The discovery and discussion of Thermite in the demolition of the World Trade Center led to serious trouble for both Jones and Bollyn.  – See more at: www.bollyn.com.

In August 2006, Bollyn was attacked at his home in Hoffman Estates, Illinois, by a heavily-armed three-man team of undercover police that had been prowling around his house for several days in a row.  The result of the police assault on Bollyn was that he was falsely charged with assault and resisting arrest; both misdemeanor charges.  He pled innocent and went through a four-day trial in which the police openly lied and presented false evidence.  Bollyn’s evidence, on the other hand, was not allowed to be presented and his expert witness was not allowed to testify.  After the seriously flawed trial, Bollyn was found guilty of both charges and faced sentencing from the same judge who had overseen the trial.

Rather than submitting themselves to injustice the Bollyn family left their home near Chicago and moved to Europe in June 2007.  He then wrote a set of books based on his 9-11 research entitled Solving 9-11: The Deception that Changed the World.

Bollyn will discuss information in his new book “Solving 911: The Deception that Changed the World” this February 24, 2015 at 7PM at the Humanist Hall, 390, 27th Street, in Oakland, CA. To buy tickets go here: noliesradio.org. This event is believed to sell out quickly so act now!